Dubrovnik has a Renaissance history and lively Summer Arts Festival. English writer George Bernard Shaw once said, “Those who seek paradise on Earth should come to Dubrovnik and find it.” The city’s climate is typically Mediterranean with hot, dry summers and cool, wet winters. Visitors can find groves of lemon, orange and tangerine trees beside palms and agaves. In addition, they can stroll through renaissance parks, flower gardens and medieval stone palaces. If you want to rent a boat in Dubrovnik you can also check out more options with our partner SamBoat.

For yacht charter in Croatia the skipper must have RYA Day Skipper Practical certificate or RYA ICC qualification. Ideal conditions for sailors looking for reliable winds. During the summer months there are steady afternoon breezes, southerly or westerly averaging Force 2-5 dying down at night. Experience level 2.

Mooring charges do apply and can range from between €30 and €90 per night depending on location and the size of yacht. Alternatively there are numerous protected anchorages.

There are scheduled low cost flights to Dubrovnik from London Gatwick, Stansted, Manchester and regional airports.
Transfer time to bases varies: 10 to 40 Mins dependent on base.

DAY 1 : Embark at Dubrovnik. Dubrovnik is one of the most prominent tourist resorts of the Mediterranean.

DAY 2 : Okuklje (20nm) is a small, quiet village on the northern coast of Mljet. There is a protected bay, plenty of shade, and a handful of restaurants.

DAY 3 : The western extremity of Mljet island is a National Park. Polace, Mljet (10nm) is a sheltered anchorage within the National Park with a few restaurants and a mini market.

DAY 4 : The historic town of Korcula (17nm) with its narrow streets and old buildings is a fascinating place. Wander around the streets, soaking in the atmosphere.

DAY 5 : Pomena (14nm) is the tourist centre of the island of Mljet. Pomena has less than 100 permanent inhabitants, and they live off farming, fishing, and tourism.

DAY 6 : Sipan island offers undisturbed anchorages with a friendly village atmosphere at the main town of Sipan Luka (24nm). An amazing botanical garden has developed along the mainland coast between Slano and Ston where ancient seafarers brought plants from all over the world. The town is a pleasingly scruffy confusion of fishing boats, nets and rusty anchors, a crumbling palazzo and a few open air restaurants.

DAY 7 : Return to Dubrovnik (15nm). Take time to explore this beautiful historic town and catch up on any last minute shopping.

Day 2: Sipan Luka, Sipan (17nm)
Sipanska Luka is a pretty waterfront village at the end of a deep inlet at the northern end of the island. The buildings are grouped around an enormous and ancient plane tree. There’s a tiny beach just outside the harbour but there are quieter spots for swimming on the opposite side of the bay accessible by a runs between the olive groves and the rocky shoreline.

Day 3: Kobas, Stonski Canal (8nm)
The canal leads to the historic town of Ston, where there is a quay. Along the way there is an anchorage at Kobas and a small harbour at Broce. The small cove at Kobas lies on the south side of the channel, hidden amongst the trees. The hamlet has been in existence since the Romans conquered this part of Croatia.

Day 4: Polace, Mljet (21nm)
Polace is the best place to leave your yacht while you explore the two deep, forest-shrouded saltwater lakes of the National Park on land. It’s about a forty five minute walk over to the lakes via Montokuc hill. Alternatively you can hire a bicycle. Malo jezero (Small Lake) and Veliko jezero (Big Lake) are surrounded by cycling and walking paths and the clear green waters just cry out to be swum in.

Day 5: Korcula (18nm)
The medieval town of Korcula is walled that was occupied by the Ventians for 800 years. Korcula Town is famous as the birthplace of Marco Polo and for its Moreska sword dance which is performed weekly during the summer months for the benefit of visitors to the island. Make sure to try some of the excellent local wines too – Grk, Posip and Rukatac are the ones to look out for.

Day 6: Scedro (17nm)
Luka Lovisce is a nearby anchorage that is popular with visiting charterers – it’s also a great place to spend an afternoon swimming and relaxing before heading ashore for dinner at one of the unpretentious bistros where you can be guaranteed a pleasant evening in the company of other yachtspeople.

Day 9: Lastovo
Lying to the south of Korcula, the tiny island of Lastovo sits at the centre of an archipelago of forty five uninhabited islets. Isolated Lastovo was out of bounds to foreigners for many years and remains charmingly unspoilt by tourism. The town is a maze of narrow streets and flights of steps that wind their way between the old houses which are notable for their unusual chimneys shaped like miniature minarets.

Day 10: Lumbarda, Korcula (19nm)
Prizna Bay is a fantastic, two hundred metre stretch of sand served by a couple of small cafes while nearby Bilin Zal is a rockier stretch of coastline with sandy interludes that enjoys dramatic views over the coastal mountains.

Day 11: Pomena, Mljet (12nm)
Pomena is the town most developed for tourism on all of Mljet. There is a good selection of restuarants and bars.

Day 12: Okuklje, Mljet (17nm)
Mljet is said to be the place where Odysseus holed up with the nymph Calypso for seven years, unable to tear himself away either from her or the beautiful island. Watch out for the mongooses whose ancestors were drafted in during the nineteenth century to get rid of the snakes and are still very much in evidence! In its day, Mljet was used by the Romans as a place of exile and later favoured as a summer residence by the admirals of Dubrovnik.

Day 13: Janska (10nm)
The sleepy fishing village of Janska is one of the most peaceful anchorages that you will find along Croatia’s Adriatic coast.

Day 1: DUBROVNIK – ELAFITI ISLANDS
The Elafiti Islands stretch northwest of Dubronvik and attract tourists in the summer season due to wonderful beaches and pristine scenery. Only three of the islands are permanently inhabited: Sipan, Kolocep, and Lopud.

Day 2: ELAFITI – ISLAND OF MLJET
Much history and intrigue surround the island of Mljet. It is thought to be where Odysseus kept Calypso for seven years. St. Paul was thought to have been shipwrecked on the island. The admirals of Dubrovnik loved to vacation on Mljet.

Day 3: NATIONAL PARK OF MLJET
The Mljet National Park consists of a large area bordering two salt water lakes. In the middle of Large Lake is a small island with a Benedictine monastery dating back to the 12th century. You can cycle, kayak, hike, or even swim in the Park.

Day 4: MLJET -ISLAND OF KORCULA
Visit the only sandy beaches on the Isaldn of Korcula, Vela Przina and Bilin Zal, to enjoy a lazy afternoon in the sun. Dine in Korcula Old Town to enjoy charming old architecture and delicious cuisine. Rumour has it that Marco Polo was born in Korcula Town, you can even visit his alleged house of birth.

Day 5: KORCULA -ISLAND OF LASTOVO
Enjoy the tiny island of Lastovo, still unspoilt by tourism. The town is a maze of narrow streets and flights of steps that wind their way between the old houses which are notable for their unusual chimneys shaped like miniature minarets.

Use our Deal Finder to discover and compare prices across Dubrovnik.
Scroll through month by month using the arrows below and click on your chosen week to see our deals.

By The Cabin Charter Offers

Don't see what you're looking for? 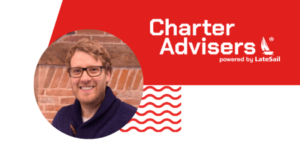